It’s been a long week, and we didn’t get a chance to get started over and over. Now that it’s late, here’s what we’ve got for this week’s Odd Prompt. Our prompt was “At a restaurant, you order calamari. The cloche is lifted, and a talking squid named Calamari gives your table a personalized stand-up comedy routine.” It turned out a little short, but given how busy this week has been, we’re just glad to turn out something.

It’s been a long, boring week, and we haven’t thought of anything to make the weekend any better. You’d think that in a town this size, there’d be something new, but it all blurs together after a while. The arcology just doesn’t have the character of some of the old cities, the ones that are characters themselves, just as much as any person. Instead, we have bland people movers that get you where you want to go, safely and quickly, with a minimum of fuss, without you needing to interact with another human being. Which is great, except if you want to interact with other human beings.

Only today, things were a little different. Not a lot. I got in the mover, got to where I was going, which was home, and there was someone walking by. Now that sort of thing does happen, just often enough not to stand out, but this was different. This guy didn’t brush by me with a bland pleasantry. Instead, he stopped suddenly in front of me. He looked me in the eye, and he said, “You need to go to Artie’s Oyster Bar.” I was pretty shocked, and I admit that i simply gawped and said “What?” He just repeated his comment, then added, “It’s what you need to get you out of this funk.”

When I got home and told Josie about it, he said “Well, it can’t be worse than anything else…” He’s been even more stuck in a rut than me.

Artie’s Oyster Bar didn’t look like anything special that night. It’s in a storefront, standard throughout the arcology, and the interior doesn’t stand out, either. We looked at the food ratings before we went, and they were good, but not so good that they explained the recommendation, either. We figured it would end up being another bland night out, but at least we’d have the story of the strange guy who stopped me to recommend it to tell.

Everything seemed pretty normal when we walked in. There weren’t many people, but it was still early, so we didn’t think much of it. It stayed the same, in fact, until our appetizer came. The waiter swept out with a covered tray, presenting it like they do in those fancy restaurants you see in the old movies. When he got to our table, he lifted the cloche, and instead of a heap of fried food, there was a squid. Well, a squid-like being. One that was very much alive, as we soon found out, when it raised itself up on its tentacles and started cracking jokes.

Sitting down in that restaurant was the last time in our lives we were ever bored without planning for it and working hard to make it happen. Since then, we’ve seen the galaxy and learned new skills. We learned enough to come back to Earth and bring our own technology up to the level to launch humanity out into the universe. That talking “squid” was an alien. So was the “man” who had stopped me as I got out of the transport. They wanted to find someone who was willing to go and learn what they needed to know to give mankind the stars.

We called him Calamari. He always gave that little burble his people use for a laugh. 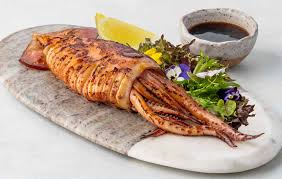 Our prompt went to ‘nother Mike, who had to write something based on “A description of a Soldier or Marine engaged in a task other than fighting (something clerical, like PowerPoint). “This isn’t what I thought it would be like!”” We’ve been waiting to read what he came up with until after finishing ours, so we’d better hurry it up!

From the scorched imaginations of a pair of public servants