This week, we ended up working with a photo prompt as our Odd Prompt. Despite (or perhaps because) our work week is slowly returning to normal, and because of some family events, we found ourselves a little behind on getting started. 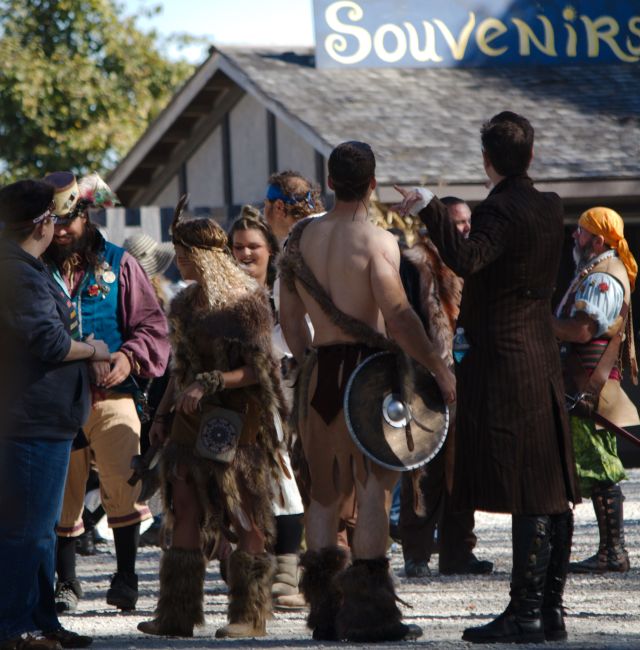 As Tamith rounded the curve to approach the village of Orren, she saw the waiting crowd. Another group of hopefuls. Her steps slowed as her hope and anticipation fled and she considered the state of her finances. It was obvious that the group ahead represented a diverse cross section of possible adventurers and heroes, from the prosperous to the desperate…more desperate than she was. Yet. But this was her third attempt to find work this week, and the crowds at each place had been similar. If only they were looking for a group, but towns were suffering the loss of income from the end of the war as well, and most could only afford to hire a single adventurer at a time to try to address their problems, most of which were also the result of the end of the war, and of less scrupulous adventurers turning to preying upon the populace.

She scanned the crowd, picking out the different kinds of adventurers by their equipment, hoping that she would at least be the only ranger to apply. She didn’t know what the quest was, since the notice had been vague, but if it involved the deep woods, as the only ranger, she might have a chance. She could see the crowd starting to sort itself out as members of the community approached with a paper and began to take down names and basic information, so she slid into place near the far end of the group.

After taking the information of the first few people in line, a Barbarian and a Bard, the apparent leader of the group doing the intake questions stepped back from the line and ran an appraising eye over it. He then pulled aside a young woman who was with the group and said something to her quietly, at which point she ran off, entering the tavern, only to emerge moments later with more paper and a pair of what were apparently servers.

The woman returning from the tavern went to the start of the line again and began writing something quickly on small scraps of the paper, handing them to each individual until she caught up to the main group. The servers followed with papers of their own, taking notes. With the exception of the first person in line, the people given the slips of paper began to wander off with bemused looks on their faces, as did the next person to finish speaking to the delegation from the town. Looking around, Tamith saw that the first few candidates were settling themselves to wait nearby in what comfort they could find, while others appeared to be moving further away, with a cluster headed in the direction the woman had pointed just before moving on.

It took another candidate walking away looking thoughtful before Tamith figured out what was happening. The town was giving people tickets that marked the order of the interviews, allowing them to set themselves up for the night in a fallow field she had passed on the way in to relax while they awaited her turn. As that worked itself out in her mind, more townsfolk came carrying rough tables and benches, which they began to set up in the courtyard outside the small tavern. Apparently, the town was also preparing to feed the large crowd, Tamith thought approvingly. She was tired of her own cooking. If nothing else, she had a chance of getting a decent meal out of this trip.

Slinging her pack to the ground with a sigh, Tamith stretched. The line had moved quickly, and she had time to set up her bedroll before going back for dinner. Since there were so many candidates, the village leaders had decided that they would interview only five candidates the first day. The villagers were doing a good job of staying quiet on what the quest entailed. Every time you approached the subject, they’d just shake their heads and so that everyone would be told at once, when the hire was announced, so she felt a bit lost as to what to do to occupy her time. She’d chosen a spot near two friendly clerics of different orders, who seemed to be busy teasing one another about their choices of deity, so she decided to approach them and see if they’d had any more luck with finding out what the mission was.

“Greetings, holy ones. I hope you don’t mind me joining you.”

“Greetings, ranger, blessings on your hunt.” As the nearer cleric turned and stepped to one side, Tamith saw that he was dedicated to her own favorite, the Forest Goddess, and the other was beloved of the God of Wild Nature. No wonder they had been squabbling so amiably. Their gods were close allies. The Nature cleric went on speaking, “Of course you’re welcome. In this crowd, we all need best rivals.” He shot a sly grin at the Forest Goddess’ cleric. “I’m Iolan, and this Demetria.”

The grouping proved to be fortuitous, with each having a contribution that made their little section of the field a comfortable place to while away the hours The others described much the same experience as that of Tamith in response to efforts to wheedle news out of the villagers, but the other two had been in the area longer and had noticed some signs of disturbances around the edges of town. Disturbed earth in the fields, marks on trees. Nothing definitive, but signs something was wrong.

When dinnertime came, they joined the others on the mismatched tables that had been set out on the courtyard in front of the tavern. The fare was simple, which was unsurprising given that the villagers seemed surprised by the size of the response to their call for applicants, but it was well made from good ingredients, inexpensive and plentiful enough to satisfy those who had come from afar. They learned that in addition to the five interviewed today, there would be twenty-six the next day, and the winner would be announced the following day. There seemed to be some meaning to the timing of the announcement, but the villagers remained quiet as to the reason.

After a relatively cozy night with shared watches, the three remained together for breakfast, wishing each other well for the day in the bantering manner the two clerics had begun the previous day until it was time for their interviews. Because he had been first to arrive, Iolan went first.

Tamith awaited the return of Iolan eagerly, only to get a headshake on his arrival. “They were pretty standard questions. I don’t know anything more than before.” Demetria said much the same on her return. Tamith too shook her head after her turn.

They spent the rest of the day chatting with the other candidates, often speculating on what the mission would be, more frequently telling stories of the recent war and where they had been during the significant actions. They had all been members of the coalition, of course. All the regular citizens of the area had, but many had fought on behalf of the smaller nations within the confederation. Whatever they had been called here to fight was likely a remnant of the other side’s forces, left behind in their ragged withdrawal, only too happy to find a place to hide away and prey on the unwary.

Night had fallen before the last candidate returned. As they ate their supper, they noticed that the villagers looked tired and many had a similar look on their faces. Amusement and surprise,and a little bit of concern. Demetria asked what was going on, and one of the servers told her that the village elders hadn’t expected anything like the response they’d gotten to their advertisement, and were having a hard time with their decision. She thought it might take them all night to argue themselves to a decision.

On the second morning, the camp rose early, people packing their things in anticipation of either moving on or starting the task ahead. They gathered in the courtyard, some eating heartily in anticipation of whatever was to come, others picking nervously at their food, anxious for the decision.

Everything stopped and everyone turned as the mayor stepped onto a platform that had been placed at one end of the area, and two others stepped in front of it to join him.

“First, I’d like to thank all of you for coming. We had no idea that we’d get such a huge response to our call.” The mayor shifted on the stage, looking uncomfortable, although it was unclear if that was over the revelation or simply over speaking to such a large crowd. “In all fairness, our cleric tried to tell us that it might be thus, when he told us that he could make no headway against the beasts.” (Aha! A clue as to the nature of the problem!)

“We simply didn’t believe that so many soldiers had turned to adventure as a means of supporting themselves after the war. It touched us gently here, as you can see, and the descriptions of devastation visited upon villages and towns elsewhere were too distant to really have meaning for us. Now that we understand this, and after more thought on the challenge ahead, we have reconsidered our plan, and we have decided to choose a pair of adventurers rather than a single one, who will then be accompanied by our cleric.” A murmur went around the tables in response to this comment.

“First, let us tell you the nature of the work ahead. A sounder of were-boar has settled into the area to our east. They have done grievous damage to our crops, and they harass travellers as well, to satisfy the needs of their more human form. They are sly and malicious, digging up crops for the sole purpose of spoilage and avoiding any guards we place on the fields.” The faces of many fell when they heard this. They had hoped for a more conventional foe–bandits or something that could be reasoned with, but were-boar were notoriously touchy even in their humanoid form.

“In view of the type of foe you will face, we have chosen Tamith and Brunt. Tamith, I’m sure you’ll be pleased and surprised to find that you’re sitting next to the final member of your team, Iolan, our cleric.”

Tamith’s head whipped around and she glared. “You were spying?!”

Iolan held up his hands, looking sheepish. “My people wanted a less formal assessment of the candidates, and asked for my help. It was surprisingly hard. I have no idea how rogues manage. I hope that isn’t a deal-breaker for you. I’d like to gather Brunt and get started on planning. Even though they can change whenever they want, the boar are more active in the days of the full moon.”

From the scorched imaginations of a pair of public servants